Just another useful snippet of information for Bashers.

Anyone planning on visiting the Festival on more than one day should note that Weekend Tickets are ONLY available Online from https://www.abbfest.org/tickets and cost £15.

Day Tickets are only available on the gate and cost £10 for Friday and £7 for Saturday and Sunday – please note only cash is accepted if tickets are purchased on the day.

All Bashers are invited to the annual Abbfest Camping Weekend kindly hosted by Blaster & Flossie at Greenawell Park Farm, West Ogwell, from Friday 22nd – Sunday 24th September. Everyone is welcome to Camp/Caravan/Motorhome – just let Blaster or Flossie know that you will be attending.

The weekend will consist of visiting Abbfest on both Friday & Saturday evenings – the Landy Taxi will be in attendance once more and will be leaving @ 19:00 sharp! Bands at Abbfest include Joey the Lips, Go Tell Alice and the Fab Beatles to name but a few – oh yes there are also plenty of Real Ales, Ciders, Wines and Food available so don’t forget your wallet!!! If anyone intends on visiting during daylight hours there are a variety of cookery demonstrations throughout the day and the customery craft and food & drink stalls will also be in attendance.

Bash rides on both Saturday and Sunday will depart from the farm in the morning – Saturdays ride maybe a bit earlier than Sundays traditional 11AM Bash departure. There will be a BBQ on Saturday afternoon/evening in the field prior to returning to the festival – BUT PLEASE REMEMBER TO BRING YOU OWN FOOD AND DRINK!!!!

Hopefully plenty of Bashers can attend – as an added bonus it is Gazza’s birthday this weekend, you can help him celebrate/commiserate and perhaps buy him a drink too!! 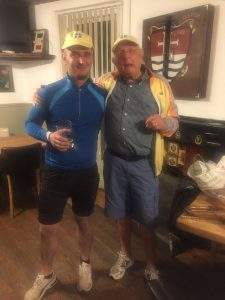 Calvin Sandford led a bunch of intrepid Bashers from The Kings Arms in Kingsteignton, up through the lanes an over Ideford Common before dropping down through Chudleigh, Chudleigh Knighton and onto The Cromwell Arms in Bovey Tracey – this is where it all went wrong! Someone – or maybe more than one – must have put a bit of extra effort in and was a little sweaty (and maybe smelly) and as a result the whole group were ejected from the pub – not good for a social cycling club!

In addition to the Main ride there were 3 other rides, the Knitters and Sewwers and 2 B groups – one of which managed to lose  Dinky who ended up at Manaton on her own!!

Eventually everyone found their way back to Kingsteignton – for the usual Banquet laid on by Sid – and the main event i.e. the Naming Ceremony. After a lot of deliberation and head scratching Calvin was named ‘Touch Up’ which is a nod to his day job as a Spray Painter.

Welcome to The Fold Touch Up.

This weeks ride is led by Nitelite from The Lord Nelson, Kingskerswell and will incorporate the annual swim so don’t forget to bring your ‘Budgie Smugglers’!!

This website uses cookies to improve your experience while you navigate through the website. Out of these, the cookies that are categorized as necessary are stored on your browser as they are essential for the working of basic functionalities of the website. We also use third-party cookies that help us analyze and understand how you use this website. These cookies will be stored in your browser only with your consent. You also have the option to opt-out of these cookies. But opting out of some of these cookies may affect your browsing experience.
Necessary Always Enabled
Necessary cookies are absolutely essential for the website to function properly. This category only includes cookies that ensures basic functionalities and security features of the website. These cookies do not store any personal information.
Non-necessary
Any cookies that may not be particularly necessary for the website to function and is used specifically to collect user personal data via analytics, ads, other embedded contents are termed as non-necessary cookies. It is mandatory to procure user consent prior to running these cookies on your website.
SAVE & ACCEPT